We would like to share Charlie McCarthy’s thoughtful and quirky speech at the launch of The Painter’s Women last night with those who couldn’t attend. Enjoy!

“The Painter’s Women is told from six different perspectives so I thought I might say six different things about Fionnuala’s novel and my experience of reading it. (Relax — they are going to be short! Ish.)

The ﬁrst thing I want to say is that there is absolutely no need for me or for anyone else to launch this book — as if it were a rocket waiting to be shot into space… The Painter’s Women has already travelled quite a distance from initial idea to ﬁnal draft; from corrected proofs to published book; from black marks on a page to vivid images inside this reader’s head. It is already launched and conﬁdently in orbit.

2. When I ﬁnished reading the novel I phoned Fionnuala to congratulate her. Not knowing the details of Goya’s life and work, I tiptoed around the question of how much was fact and how much was ﬁction. I was hugely relieved when she said that most of it was made up. Of course, the novel is true to the facts of Goya’s life and accurate about the many paintings mentioned. It is also true that these women did exist.   But their inner lives and voices and viewpoints are totally imagined and all the better for it. Fionnuala has obviously taken the good advice of Emily Dickinson to ‘tell the truth but tell it slant’.

(This is number 3 in case anyone is so bored that they’re counting.) Today I went to the National Gallery to look at their only Goya. It wasn’t there — it’s out on loan. All the more reason then to imagine a tour of Spain and France, Fionnuala’s book in hand, visiting the locations and tracking down all those Goya paintings. In lieu of that exciting trip, I do intend to re-read the book, Google Images at my ﬁngertips, looking up each painting and print as it is mentioned. It is a clever writer who makes it almost essential to read their book for a second or even a third time.

4. Of course, nothing is more autobiographical than the writing of ﬁction. And so while reading this novel a portrait, or indeed a self-portrait, of Fionnuala emerges. If you didn’t know her personally, you would learn that she is expert in the history of visual art and passionate about what artists do. She also has the emotional intelligence to reﬂect on the big themes of all our lives: love and loss and longing. Most importantly, she is someone who exudes the life force and celebrates it throughout her novel. Proof of this is in the all-important opening sentences which declare that a man might as well be dead if he doesn’t live energetically. Indeed.

5. The six principal characters in The Painter’s Women are a daughter, daughter-in-law, two wives, (one ofﬁcial, one not so much), a rich patron and a young innocent model. These six well-drawn characters are clearly not in search of an author. Though these women mostly bow to the notion of the Great Male Genius, Fionnuala counterpoints this by giving over the entire narrative to them, women who are neither Great nor Male (obviously / luckily) nor Geniuses. These are women who are mostly now forgotten; not so much written OUT of history as never written IN to it. The novel corrects this imbalance with great conﬁdence. Not only that, but Fionnuala risks and carries off that most uncynical of conclusions — a fairy tale ending. And that is some achievement!

(You’ll all be happy to hear that this is number 6!) So, there is no need to launch this book. But if I was a Royal, on a gangplank, overlooking the big ship of this novel, I would be honoured to smash a bottle of champagne against it, conﬁdent that it is sea worthy, water tight and ready to meet its readership. So if you haven’t already, I encourage you to get your hands on a copy because after all there is no such thing as a free launch.”

*Charlie McCarthy is an award-winning film director and producer. 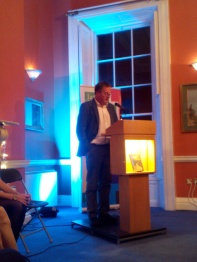 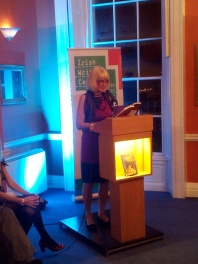