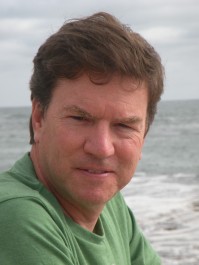 Colin O’Sullivan:   The Last Island covers important issues like “environmentalism, animal rights, and the costs of capitalism”.  What made you want to write about these issues?

David Hogan: I believe that these are among the paramount issues of our time, and that our responses to them will shape the future. So it would’ve been hard for me not to write about them. In The Last Island the main characters are exiles and in the process of re-invention and redemption. As they struggle to re-make themselves, they are forced to ask certain questions such as: What obligation do we owe our planet and the creatures upon it? What is the nature of desire and possession? What level of cooperation or competition is appropriate? They may not find all the answers, but they are asking the questions. I believe that society too needs to undergo a process of re-invention and redemption, as many of the current answers to these questions become increasingly untenable. We don’t have the answers yet, but, like the characters in The Last Island, we need to continue to ask the questions.

O’S: What do you hope readers will take away from The Last Island?

D.H.: First off, I hope they will find the book transporting and engrossing. And I hope that they will feel that they’ve met some intriguing and thoughtful characters, who offer unconventional ways of thinking about modern life. There are many issues at play for which the novel provides no definitive answers. It does ask a good number of questions, however. In those questions, I hope that some readers might see possibilities.

O’S: Who do you picture as the ideal reader of your work?

D.H.: In Walker Percy’s The Moviegoer, Binx Bolling is on a search, which is described as “what anyone would undertake if he were not sunk in the everydayness of his own life.” Binx resists naming the object of his search; it may be God or a greater purpose or something else entirely. It’s a quixotic endeavour with an unclear goal. But what is most important, he believes, is to be aware of the possibility of the search, even if one is unable or unwilling to undertake it. My ideal reader is probably no different than the ideal reader of many other writers. It’s someone who, like Binx, is aware of the possibility of such a search and may read novels for that reason, among others.

O’S: Who is your biggest literary influence? Which writer, living or dead, would you most like to meet?

D.H.: I’ve a whole stable of writers that I keep returning to: Dostoyevsky, Joyce, Beckett, Nikos Kazantzakis, C.P. Cavafy, F. Scott Fitzgerald, Ralph Ellison as well as Walker Percy, Frederick Exley, and Jennifer Egan. I read the work of playwrights Tom Stoppard, Martin McDonough, and Rebecca Gilman. I’m very much into the American poet Wendell Berry at the moment. I think his Manifesto: The Mad Farmer Liberation Front speaks to what ails us.

As to meeting a writer, how about this? I’d like to have been in one of those bars in Paris with Joyce and Hemingway. We’d drink, talk books and then, if Joyce got into a fight, I’d have the pleasure of watching Hemingway step in for him. “Deal with him, Hemingway,” I understand Joyce used to say. It’s the greatest tag-team in the history of literature… or is it boxing?

O’S: What are you currently reading?

D.H.: Skippy Dies by Paul Murray, and I’m wondering why it took me so long to get to it. I’m about half-way through and, so far, it’s thoughtful, moving and very funny.

O’S: Do you listen to music when you write?

D.H.: I like to have something quiet and familiar playing in the background, especially in the first draft stage. If The Last Island has a soundtrack, it’s some of the older CDs of the Pat Metheny Group such as First Circle and Still Life (Talking). When I was struggling with one of the scenes in the Aegean Sea in The Last Island, I can remember listening to the glides and builds of First Circle and thinking ‘something like that.’

O’S: Do you have any words of inspiration on your writing desk?

D.H.: No, none, though I probably should. I do have a memo posted on my desk that reads: no ‘and then’ scenes. It’s to remind me to structure events by direct cause and effect, as opposed to episodically. Useful, I suppose, but far from inspirational.

O’S: Do you read the reviews you get?

D.H.: I probably shouldn’t – they say you shouldn’t — but I do. If someone takes the time to read my novel (or see one of my plays) and write about it, I’m interested in what they have to say.

O’S: You are involved in different kinds of writing, novels, screenwriting, etc. Which comes easiest to you? Which is most difficult?

D.H.: Playwriting seems to come easiest to me, though I’m not sure why. It might have something to do with the limitations of the stage, which demands a mere handful of characters and a single setting or two. It’s dialogue-based, and you can count on the actors, if they’re good, to bring out more than what’s on the page. There’s a tradeoff, of course, because what’s on the stage can be something entirely different from what was imagined, for better or worse. Novels are the most difficult for me, but the satisfaction is great, perhaps for that reason.

O’S: Being an Irishman I’m very pleased you wrote about At Swim Two Birds for your novel recommendation. Is there any other Irish novel or writer that interests you?

D.H.: Many of them. To my mind, the lyrical wordplay of Irish-English is unrivalled. I read anything by Colum McCann, Anne Enright and Kevin Barry. I think I’ll be adding Paul Murray to that list. I’m also a big fan of Irish crime fiction, especially when Tana French, Ken Bruen, Declan Burke, and Brian McGilloway (to name just a few) are doing the writing.

O’S: What does David Hogan do to relax?

D.H.: Less than I used to. Dinner, concerts, the occasional play. The Pacific Ocean lies only a few miles away, and I try to paddle out once or twice a week. My co-surfers call me Big Wave Dave, which, I assure you, is unreservedly ironic.