It is clear, when talking to Richard Kalich today, that he is a novelist whom, once you hear of him, you wonder to yourself how you haven’t heard his name before. He is not a writer one would describe as prolific. He has endured writer’s block and the terror of creative writing for a sustaining portion of his life. As he says, he’s read too much and knows all too well the standards his work will be held up against. A daunting task, he says, when your first literary Gods were no less than Dostoyevsky and Thomas Mann. This understandably has held his output down. Having said that, the works he has produced over the years, have been of exceptional quality, as is reflected in the recognition he has received from the academic and literary elite. Kalich has won The American Book Award and has been nominated for both a National Book Award and The Pulitzer, and his writing, in its daring experimentalism, surreal absurdism, and especially because of the dark demonic depths he has mined of the human interior, has been favourably compared to writers such as Kafka and Beckett. Needless to say, this is no lightweight author we’re dealing with.

I talk to Richard (he prefers to be called Dick), and almost immediately I grasp that he’s exactly what you would expect when one thinks a New York literary writer, an avant-garde post-modern novelist—and then some. Kalich is opinionated, quick-witted, funny, and simply brimming over with all of the things he has to say about the spiritual impoverishment of our contemporary age. We discuss, among other meandering subjects, the death of the word, the loss of Transcendence, the diminishment of the Self, artistic inspiration, films and musicals, and, of course, the release of his current most recent publication, Central Park West Trilogy (2014), a collection of three of his critically-acclaimed novels; The Nihilesthete (1987), Charlie P (2005) and Penthouse F (2010).

LSB: The first question I pose to Kalich, is an attempt to create a tidy summary of his writing (silly me). I say that his novels (there are four in all – added to those collected in the Trilogy is The Zoo, published in 2001) have been described by critics as ‘postmodern fables’, suggesting, by definition, that they are designed to convey a particular moral. Does he consider this a fair conception of his work? And if so, what is the moral message he is attempting to convey?

RK: No, I don’t think it’s correct to define my writing as fables. There are themes, yes, but I’m not trying to offer some categorical cure-it-all to the problematic situation of Man. I’m neither theologian nor a politician. My concern in my first novel, The Zoo, was loss of inner life. After long years of writer’s block, the novel just exploded out of me. Thirty days. All too quickly to really do it justice. With my second novel, The Nihilesthete, I was taken by the spiritual diminishment and the all-pervasive powerlessness that I felt was taking over our culture which in turn prevented and inverted my lead character’s full expression. Such is the motive-force behind the almost banal, cerebralized cruelties he harbours upon his arch-enemy, the artist, Brodski. The artist, of course, representing spiritual fecundity. The novels themselves are metaphorical. I see the world metaphorically. The first thing that happens, is that I see an image in my mind. This image is the epicentre of what I build my narrative around. It provides the beginning, middle and end for my story. The image just comes to me. It’s a sort of poetic gift. I’m told some Poets see the world like this. For example, with The Nihilesthete I saw a limbless being strapped to a wheelchair, a prosthesis attached to his arm stub which served as a hand, struggling to paint on a canvas held just out of his reach by an ominous male figure. The image gestated in me for a long time, five years, before I finally found the courage to write the book.

LSB: Why is that?

RK: Fear. Dread. The Terror of Creation. More specifically, for me it’s always been the fear of judgement. Dostoevsky or nothing. I carried that burden with me the better part of my entire adult life.

LSB: But why so hard on yourself? You never outgrew it? 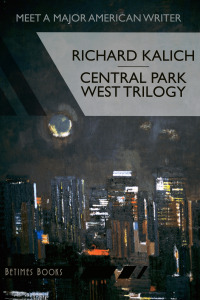