The Dark Manual defies easy categorisation; it’s a literary novel, a very desperate tale of love and loss, a noir thriller, of real and imaginary threats and a sci-fi speculation (which could be read as prescient future gazing). O’Sullivan has carved himself a distinct niche in the blackly comic noir world. The Dark Manual proves that he is as comfortable writing about Japan, the place where he has lived for many years, as he was writing about his native Ireland in his earlier novel Killarney Blues. The Dark Manual is a mature rounded work, assured and confident, at times lyrical and beautiful but also punchy and sharp. Susie Sakamoto’s bleak world is painful and depressing but compelling and honest. Yet this isn’t a hard read, it’s engaging, inventive and thought-provoking.

So The Dark Manual takes us into the world of Susie Sakamoto, an Irish woman trapped in a nightmare since the disappearance of her husband and son, Masa and Zen, in a terrible plane crash at sea. Susie is alone in her grief, except for the homebot, Sonny.

“Her deep despair. Her piteous and addle-egged mind….Gravity pinning her right down. Gravity seems so much heavier these days; her bones, now leaden and so hard to move. She is rooted. Rooted to this spot. So firmly, so horribly stuck.” 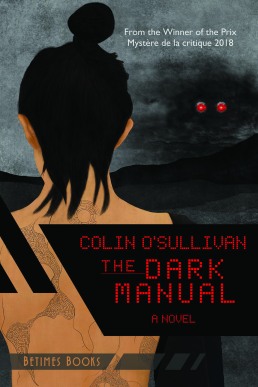 The description of Susie’s home life is so stark and brutal, it could be an interior scene from Blade Runner 2049. As Susie sprawls on the couch unable to relieve the torpor she is irritated by the hoover, is it just a symptom of her malaise or something more insidious? Her life is managed by the homebots, particularly Sonny, model SH.XL8. Susie can cook, she can clean, she used to be able to manage her life, but now the machines do all the work. Even though she doesn’t want to acknowledge their presence they become one of her only means of discourse. Sonny is male, he responds to commands, but is there a touch of sarcasm in his answers, an independence, is he manipulating her life? Is Sonny arguing with her? For the reader the exchanges with the homebot are witty, for Susie they are both necessary, invasive and disturbing. Did she ask the health information monitor to tell her, her weight, to suggest a revision in her diet?

Susie is adrift after the death of her family, mired in grief and not coping. She was a confident woman working for an online news outlet compiling a column: “a foreigner’s interpretation of Japan”, which was translated from English to Japanese by machine and checked, but rarely corrected, by a sub-editor. She’s not ready to return to work and fills the void with bars and booze with her friend, Mixxy. Are her problems with the robots in her head, are these computers a benign or malignant force. What is The Dark Manual, and what did her husband have to do with it?

There are so many facets to this novel, subtleties to the story, but I have want to concentrate on three major themes. Grief – this is a study of a woman on the edge of a nervous breakdown, suffering the profound grief of losing her loved ones (grief the devouring monster). It’s grief in an alien environment, or perhaps more accurately, the realisation that any environment becomes alien when grief strikes. Susie’s grief is all she is left with in the world where she has so little real contact to other humans, where everything is done for her by machines but nothing fills the void. Artificial intelligence – the fear of a future in which we may not be in charge, think of a more intellectual Humans (the Channel 4 series). It’s deja vu, the re-emergence of Frankenstein’s monster, except this time there is a genuine concern that the machines will outstrip us. Will we be consumed, altered, rendered helpless by machines? Truth and memory – was Masa the man she thought he was? We all want to believe we know the people who are close to us but do we really know others? What if the human impetus for the robot programmes is not benign? O’Sullivan has an understanding of the power of words, their placing, their specific meaning, that reminded me a little of Bernard MacLaverty’s use of language to conjure images in Cal. This bleak, but also witty novel is a philosophical musing on what we are and how we respond to life; grief, the future, a world inhabited by AI. The dystopian future has been the staple of sci-fi (1984, Brave New World). This is a modern novel that reflects the current malaise and modern preoccupations. As a thriller this is a page turner, a really intriguing read.

The publisher, Betimes Books, is about to announce a major film deal for the The Dark Manual, which will be one to keep an eye out for. [SOON!!!]

If you like The Dark Manual I would thoroughly recommend O’Sullivan’s earlier novel Killarney Blues, an unconventional crime novel of small town living in Killarney – everyone seems to be in a funk. Bernard Dunphy loves American Blues but he’s troubled by his father’s suicide. The sins of the past always have ramifications in the present. A sudden violent act has an impact on Bernard and the young people of the town. Killarney Blues is engrossing, witty, depressing and uplifting. Winner of the Prix Mystère de la critique 2018.