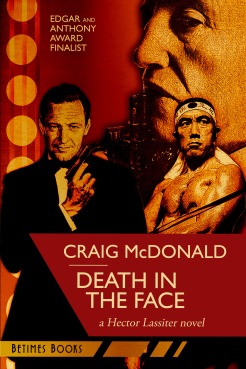 “Quite alone, yet somehow quite happy, Hector drove on through the sweet-smelling autumn rain, back to his home and family.”

This one true sentence, from the ending of the newly finished novel, Death in the Face, by Craig McDonald, an Edgar and Anthony Awards Finalist, brought to a close my nine-novel journey through the mid-20th Century world, with Hector Lassiter, the man who “writes what he lives and lives what he writes.”

Death in the Face takes place in 1963 and finds Hector at 62 years of age. He is starting to feel that the modern world is passing him by and that he might be slowing down a step or two. He has lost some dear friends and lovers, and, at night, he is haunted by realistic dreams and visions of his life’s love, Brinke Devlin. Brinke’s tragic death still tears at him.

Hector is invited to come along with his old and slowly dying friend, British author, and former spy, Ian Fleming, to the land of the rising sun. Ian is finding late success with his bestselling James Bond series of novels, which have just begun to be made into movies, starring Sean Connery.

Long ago, just after World War II, Ian and Hector, who were intelligence agents at the time, had tried to get their hands on a deadly biological weapon, developed by the Japanese, that could spell doom for whatever country it was used on. While in Japan this time, Ian is determined to find it again, and Hector is along for the ride, with the hope of recovering some previously unknown writings by Brinke Devlin, which are also supposedly there.

As usual with a Hector Lassiter novel, there is plenty of action, deadly villains, a fetchingly beautiful spy, with her eye and gun on Hector, James Bond-type gadgets, intrigue, twists and turns, sexy romps, tragedy, loss, and many reflective moments where the sheer poetry of Craig McDonald’s writing stops the reader in their tracks. There are places where a passage is so moving that it must be read all over again.

I admit to feeling a bit sad about finishing my last Hector Lassiter novel. The books have taken me on a journey all the way from Paris in the 1920s, to Key West in the 30s, Germany and France during World War II, 1950s clashes with the Cleveland mob, assassins in the South-west, and Hollywood, Nashville, and finally Hawaii.

I have met historical characters that have come to life fully fleshed, due to the author’s genuine depiction and understanding of them. Ernest and Mary Hemingway, Gertrude Stein, Sylvia Beach, Orson Wells, Eliot Ness, Robert Shaw, Yukio Mishima, Mitsuharu Kaneko, Lester Dent, Rod Serling, and George W. and Prescott Bush, and many more.

Thanks, Craig McDonald, for these wonderfully entertaining and deeply felt novels. I feel Hector Lassiter is the best on-going character ever created in fiction. Truly the last man standing. There is not enough praise that I can give you for your mighty creation and your masterful writing.