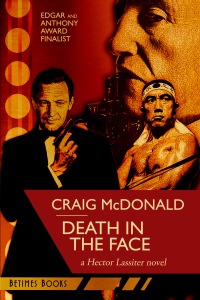 Sean Connery, dressed in his immaculate gray Anthony Sinclair-tailored James Bond suit with pale blue shirt and black knit tie, nodded for another bira—a beer—and said to Hector in his juicy, Glaswegian Scots accent, “I’ve read your stuff, Mr. Lassiter. Much of what I’ve read I’ve quite loved. Let’s say I can pry little money out these fat producers’ pockets. If so, would you maybe option something to me? I have a novel or two of yours in mind. God knows I don’t want to end up type-cast as this silly character for life. Your characters are much closer to the ground than Mr. Fleming’s.”

Hector tapped bottles of Bomonti with the cinematic version of Ian’s James Bond and said, “By all means. Whenever and whatever you want, Sean. You should know up front, I have a ruthless maxim regarding any and all film options: my book, your movie. If your option money spends, I smile, shake hands, and get the hell out of your way. If the damned thing somehow miraculously comes out okay in the end, I’ll deliriously say so to the press and raise a glass in tribute. If it’s a dog, I maintain a respectful silence.”

Sean smiled and said, “Very good! I do so appreciate a fellow professional. We’re a dying breed.”

Hector had been a week in Istanbul—this now shabby, threadbare ghost of Constantinople, as he thought of it.

It seemed all dust, blast furnace winds, hucksters and dodgy religion to Hector.

He’d hobnobbed with the Bond film producers, done a little uncompensated and un-credited script doctoring just for the hell of it and for free drinks.

He’d also nearly lost Vannina Bello in the very early going after a man with a knife came at them as they were exiting a seafood place along the Bosporus during a sight-seeing blitz.

It hadn’t seemed at the time like anything remarkable—nothing tied to old unfinished business of one sort of another, nor to old enemies.

The attack hadn’t even struck Hector as being credibly tied to the Flea Bomb in any way.

No, it had been—or so Hector had decided in the moment—a simple case of random street crime. It was just dumb bad luck that it was they who had nearly become victims. Happenstance, Hector told himself, that was all.

But Vannina’s candid words in the wake of that attack cut close to bone: “I see now the journalists are maybe right about you and the collision between your life and the page, so to speak,” she said bitterly, her chin trembling in fear. “If this is how things always are for you, then I can see now why you’re still a bachelor…and a widower. This was all terrifying, yet you seem to take it almost in stride, even now. That leads me to believe it’s not an uncommon thing for you. Now I fear that maybe you even savor this sort of thing.”

It was an entirely sensible point of view, he had to confess that was so.

But, in the end, he soothed her into staying on with him, sharing his room and bed while waiting for an opportune moment to effect an introduction between Vannina and the Bond producers. He needed to do that much for her in recompense, he told himself.

But if things were somewhat rocky for Hector, they were far more tumultuous for the cast and crew of From Russia with Love.