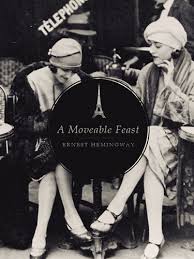 It is still difficult to comprehend what happened in Paris last weekend. Tonight as I write this there are reports of terrorist threats on cities as diverse as Brussels and Atlanta. Inside a crowded downtown Manhattan cafe, we hear a police siren and fire truck pass and all of us raise our heads and look to the window. Tomorrow I will go to work near Times Square and I can’t help imagining what if…It’s easy to fall prey to the most crippling fear when the bad guys seem to be maniacally spinning a desktop globe of the world and stopping it randomly, their only strategy of attack apparently pointing to a colored landmass with a dirty fingernail. But we just can’t allow ourselves to get mired down in the headlines… unless the headline is this one:

Hemingway’s Paris Memoir Flies Off Shelves in Show of Defiance

A Moveable Feast, or Paris est une Fête in French, first published in 1964, Hemingway’s gorgeous account of life in Paris during the 1920s, is undergoing a resurgence in popularity across France. Amazon.fr orders have increased 50-fold. Copies have been laid alongside the flowers honoring the deceased. Social media movements such as #jesuisenterasse or #everyonettothebistrot call Parisians to continue to get out and live the life that their unique city offers. Everything the book celebrates, and Paris represents, is here in these words of Hemingway’s:“We ate well and cheaply and drank well and cheaply and slept well and warm together and loved each other.”

Vive la France! I’m with you! Thanks for showing us how it’s done.

Nothing makes the heart sing like the resilience of the human spirit. By maintaining the comforting rituals we enjoy, immersing ourselves in the minutiae of daily life, we will conquer the worst of it.

This LOVE created by Louis Vuitton in the wake of the attacks might arouse the cynicism of those blinkered types who decry it as corporate logoing of a tragedy.

Get out and shop, it says. Treat yourself to something nice, something you’ll love forever.

In fact, grab a copy of Hemingway’s fifty-year-old love letter to Paris, put on your most scandalous frock or loudest britches, don a hat, put the Chihuahua in your purse, and set off promenading to the nearest boîte. No, the ostrich boa isn’t too much. 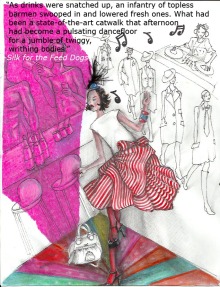 I almost moved to the city once but life took me to a neighboring fashion capital instead. But it has always represented my two passions, fashion and literature, and with the two simple gestures mentioned above, Paris has assured me that it will be ok. Better than ok, it will be a feast.

Jackie Mallon, author of Silk for the Feed Dogs