Tired of being a stay-at-home and a couch potato, Charlie P gives a gala New Year’s Eve party which not only he but nobody else attends. Even Charlie P was surprised at the turnout. To be sure, this is the best party he’s never been to. The one he would least have wanted to miss.

The entire affair was catered by the world’s greatest chefs, and platters of sumptuous foods were served by geishas in kimonos and men in black. 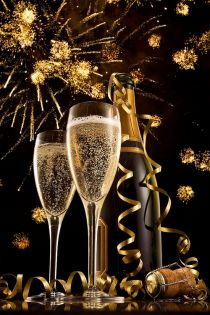 Champagne flowed like April rain. Every guest was given a token of appreciation for not attending, diamonds and gold; and for those who didn’t wear jewellery, thinking it ostentatious, or trade gold in the market, Picassos from the Blue period. And the entertainment was world class. From the Three Tenors, Nureyev and Fontaine, to rappers and hip-hop. From chart-breakers and the current pop, to has-beens and never-was’s. Fireworks lit up the night sky before, during and after the party. Needless to say, there was something for everybody. For every taste and desire imaginable.

At long last Charlie P knew what it was to have the spotlight. To be the center of attention. If not for him this party that did not happen would never have taken place.

But what gave Charlie P the most satisfaction was the fact that all the people not attending the party got along charmed the pants, if not panties, off young career women in the bloom of youth. While hangers-on, freeloaders, and weak sons of strong fathers could be seen having serious and meaningful discussions with men of the cloth. And chronically cheating husbands and adulterous wives, who had fought tooth and nail over divorce settlements, alimony payments and child support for years, were now laughing together, making merry and dancing cheek to cheek. On a larger scale, and despite ancient enmities that had made for a thousand years of hatred, world rulers and Heads of State were making every effort to reconcile their differences; open lines of communication; enter into dialogue. And so, on this night, at Charlie P’s party, at least, there was no such thing as separation of Church and State; East vs. West; men vs. women. Indeed, there was only commonality of purpose, good cheer, peace on earth and good will towards men.

For certain, at Charlie P’s gala New Year’s Eve party which didn’t take place—happy times were here again. Still, by the night’s end, Charlie P was visibly disappointed. The crowd had already filtered out, most rushing off to other parties, and other than a few tepid kisses on the cheek from the women, ceremonial hugs from the men, and the usual “see you next year”’s, Charlie P once again felt empty, alone, deserted.

He certainly wasn’t ready to relinquish the spotlight, stop being the host and center of attention. And, so, he began thinking about next year’s party. No, it would not be a sequel of this year’s event; a rehashing and recycling of the time-tested and familiar. Next year Charlie P decided that rather than be a small fish in a big pond, he would be a big fish in a small pond by giving his party in a soup kitchen for the hungry and homeless, the needy and disenfranchised. Not only so well. High rollers mixed with paupers, and aging playboys would he save a fortune by not having to wine and dine his guests with diamonds and gold, but all those unfortunates needed to be happy was a bowl of hot soup, a warm bed, a pair of sturdy thick-soled boots and a windbreaker for the ensuing winter months. Toss in a few extra dollars to keep them off the dole, and, rest assured, more than lukewarm kisses and perfunctory hugs, he would be adulated, venerated, possibly even canonized as a saint.

But what if all those people who didn’t attend this year’s party attend next year’s party?

The excerpt also appears in our collection GIFTS.