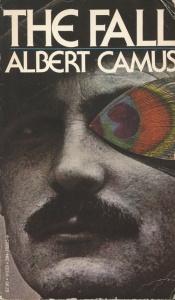 Reading The Fall was a life-changing experience. But let the novel speak for itself:

“Don’t lies eventually lead to the truth? And don’t all my stories, true or false, tend toward the same conclusion? Don’t they all have the same meaning? So what does it matter whether they are true or false if, in both cases, they are significant of what I have been and what I am? Sometimes it is easier to see clearly into the liar than into the man who tells the truth. Truth, like light, blinds. Falsehood, on the contrary, is a beautiful twilight that enhances every object.”

“Freedom is not a reward or a decoration that you toast in champagne. On the contrary, it’s hard graft and a long-distance run, all alone, very exhausting. Alone in a dreary room, alone in the dock before the judges, and alone to make up your mind, before yourself and before the judgement of others. At the end of every freedom there is a sentence, which is why freedom is too heavy to bear.”

“Thus I progressed on the surface of life, in the realm of worlds as it were, never in reality. All those books, barely read, those friends barely loved, those cities barely visited, those women barely possessed. I went through the gestures of boredom and absentmindedness. Then came human beings’ they wanted to cling, but there was nothing to cling too, and that was unfortunate for them. As for me, I forgot. I never remembered anything but myself.”

“A single sentence will suffice for modern man. He fornicated and read the papers. After that vigorous definition, the subject will be, if I may say so, exhausted.”