“My studio apartment has all the features of an artist’s garret now. Everything careless, lackadaisical and purposefully strewn about. The only thing missing is the proverbial skylight, but I do have bay windows and a park view. Still, Montparnasse it’s not. There are canvases everywhere: rolls of canvas, stretched canvas, some stretched and mounted on canvas boards. Also a dozen paintbrushes, round and flat and long, and even more tubes of paint in all colours; Payne’s gray, burnt sienna, burnt umber, viridian, sepia, zinc white, Naples yellow, cobalt blue, yellow ochre, thalo green, venetian red. And an artist’s smock and easel, and roto tray, and turntable, and palette. Everything and anything that goes into an artist’s studio is here, plus all of Brodski’s own special equipment.

The little fellow doesn’t know what to make of it. He peers open-mouthed as I strap him to his artist’s chair—the relaxation chair with nineteen different seating positions and seventy more for the upper body—and commence attaching his arm and hand prosthesis. The occupational therapist I employed has taught me well and I know how to use each piece of equipment as well as how to staple the stretched canvas tightly to the canvas board so it won’t ripple. When he is seated at his workplace (easel) with the canvas before him and rivulets of paint already squeezed out on his plate positioner (palette), I say: PAINT.

He looks at me, at the canvas, at his surrounding, dumbfounded. Not paralyzed, but stricken in another way. As if in limbo. As if groping to understand, to come to terms with what lies before him. I am tempted to help him. It would be such a simple matter for me to demonstrate how to “finger” the paintbrush with his table writer, or, for more exact control, his pencil holder; how to, with what for him would amount to a Promethean effort, touch the canvas with his brush. But I do not. It wouldn’t be fair. The rules of the game do not permit it. The first stroke must be done by him. The discovery has to be his. The miracle must come from him alone. To be godlike, one has to create his own world. It is enough for me (now) to show him the way.

We sit there five, ten, twenty minutes; an hour passes, two. I do not say anything. Do not coax him on. Not so much as a word or hint passes from my lips. Absolute silence pervades the room. Then: he begins to move. Slowly at first, with imperceptible little stirrings of his body, followed by epileptic twitchings and wrigglings of his arms and hands.

What’s this? He’s stretching-reaching-picking up the paintbrush lying on the plate positioner in a glass cup, just begging for his use. He’s dipping it in a glob of paint. He’s . . . He’s . . . HE’S PAINTING!!! His first stroke is slow, halting, tenuous, as if a spanked child were reaching out for the object that caused him harm. He looks enthralled—no, terrified.

After his first stroke he jerks back; his paint brush drops from his utensil holder against the glass cup and pan holding the other brushes and tubes of paint, and the entire collection as well as the roto tray spills to the floor. He doesn’t even notice. Awestruck, he just continues to stare at the canvas. At a gashed slightly less than linear violet smudge: HE MADE!

A tiny wet spot wells up in his eye. A soft voluptuous half sigh, half groan, and then more tears, a sound that emanates from deep inside him, an indistinct murmur, a shriek, an ecstatic outcry, a crescendo of uncontrollable and involuntary body-racking shakes and sobs. He is crying. Really crying! Not his usual “cri du chat”; but crying like us. Like we humans do.

A half hour passes before he is able to start up again. This time by trial and error, each dip and dab of his brush reminiscent of a naked hand in a fire struggling to save a beloved object. After each new impression, he stops haltingly to examine it. Not for aesthetic reasons. He has no concern for that now. But for the sheer effect of it. The impression he is making on the canvas. ON THE WORLD! It is the first time he has ever been able to affect the world. Make his mark. HE IS PUTTING HIS STAMP ON THE WORLD!!!

After maybe another minute or two he falls back exhausted. I push his chair away from the canvas and together we look upon his creation. Grazing my hand ever so slightly on his utensil holder, as if touching the finger of God, I begin to cry. We begin to laugh and cry together. We stay there in tableau like that, both crying and laughing, the rest of the night.” 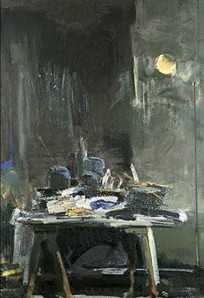